Astigmatism is a refractive error (ametropia) that occurs when parallel rays of light entering the nonaccommoding eye are not focused on the retina.

The essence of astigmatism is in unequal refractive power of the optical system of the eye in different meridians. 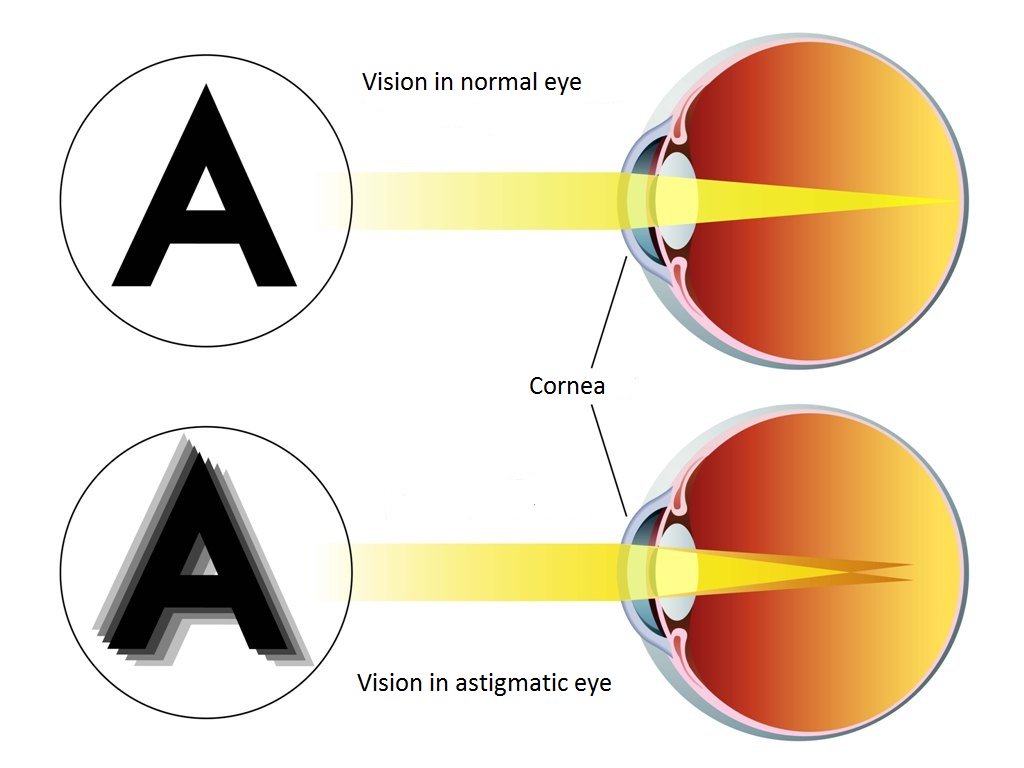 Meridians called circles passing through the anterior pole (center of the cornea) and posterior (symmetrical to the front pole point in the posterior part of the eye) pole of the eye. In astigmatism curvature of the cornea is irregular and therefore one of meridians will have maximum refractive power and it perpendicular will have least refractive power . Under such conditions, the eye will not have a single focal point and clear images of the objects.

Astigmatism can be also associated with a change of the shape of lens. However, it is so rare, that in practice it does not take into account.

Degree of astigmatism is the difference between the refraction of the main meridians. If one of the meridians is emmetropic it called the simple astigmatism.

Often suspect the presence of astigmatism can be in determining in visual acuity with test tables: due to the peculiarities of refraction of rays in the eye, a person suffering from astigmatism can wrong call the big signs and letters on the table and correctly distinguish smaller, which is not typical either myopia or hyperopia.

1) Prismatic component. As a measure of the prismatic component of irregular astigmatism was taken the angle between the anatomical axis of the eye and the line connecting the anchor point with the center of the retinal image.

2) Cylindrical component. As a measure of the cylindrical component of irregular astigmatism was taken the distribution of refractive cylinder for each of the meridians in which the area enclosed between the retinal image and those in the Gullstrand eye (ring shaped) is minimal.

3) Spherical component. As a measure of the spherical component was taken the distribution of the refraction of sphere made ​​for each of the meridians in which the area enclosed between the retinal image and those in the Gullstrand eye (ring shaped) is minimal.

Also there is a link between prognatia and development of astigmatism, often with hypoplasia of the maxilla and the combination of underdevelopment of the upper and lower jaws, vaulted palate with a narrow upper jaw. Astigmatism is detected in patients with wrong maximum intercuspation, deep locking maximum in conjunction with the deformation of the upper jaw , with multiple primary edentulous.

So astigmatism can occur in different types of abnormal development of the maxilla (upper jaw underdevelopment, its lateral compression, flattening of the front part of the upper jaw, etc.).

In many cases it may disappear or decrease in the successful treatment of anomalies of the upper jaw.

In a subjective method of determining astigmatism, the patient is put on trial frame into which is inserted a cylindrical lens power of 0.5 diopters and made the axis vertical, if the vision does not improve, gradually turning axis in the trial frame to a horizontal position. Having found such a position of the axis, where visual acuity is better the doctor gradually increase the strength of the cylinder. The smallest cylindrical glass (converging or diverging), which achieved the highest visual acuity and will be the right glass. In the same manner is possible to find first cylindrical glass add the desired spherical .

Another rarely used refraction technique involves the use of a stenopaic slit (a thin slitaperture) where the refraction is determined in specific meridians  - this technique is particularly useful in cases where the patient has a high degree of astigmatism or in refracting patients with irregular astigmatism.

Stenopaic slit turn around anteroposterior axis intended to find a position with the best and the worst vision. This will correspond to the main meridians. The doctor  put a spherical glasses in front of the slit defining its refraction for each meridian.

So defined presence of astigmatism and it's degree. According to the obtained parameters assigned a necessary spherocylindrical or cylindrical correction.

Also the degree of astigmatism and direction of the main meridians can be detected by skiascopy. Except skiascopy the objective methods are keratoscopy, oftalmometry and refractometry using a refractometer of Hartinger.

The treatment and correction of astigmatism include the use of the following methods:

Simple astigmatism correctes only by cylindrical glass, mixed and complex by a combination of spherical and cylindrical glass. With age astigmatic glasses is more difficult to bear. So for adults if the correction was made for the first time and present high degree of astigmatism you may not assign  fully correcting glass. In this case, assign weaker glass and 3-6 months later, after getting used to it you could pick up stronger, and then completely correcting astigmatic refraction glass.

When you selecting eyeglasses for distance it's advisable to fix the axis of glass vertically and in glasses for reading - horizontally.