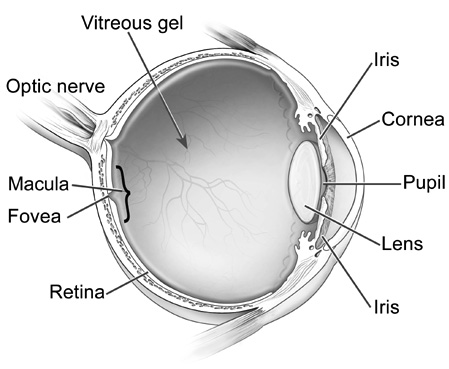 Cornea is front convex, transparent, avascular plate of the eyeball, which is direct continuation of the sclera. Human cornea is approximately 1/6 of the outer layer of the eye. It looks like  a convex-concave lens, in place of transition into the sclera (limbus) it has the form of translucent ring up to 1 mm. Its because the deeper layers of the cornea posteriorly extend slightly further than the front.

The distinctive properties of the cornea:

Growth of the cornea is carried out by thinning and stretching the tissue.

Composition of the cornea

The composition includes water, mesenchymal origin collagen, mucopolysaccharidoses, proteins (albumin, globulin), lipids, vitamins. Corneal transparency depends on the validity of the arrangement of elements and their indices of refraction as well as on its water content (normally up to 75%, increasing of the water content in excess of 86% leads to corneal opacities).

Therefore primarily change the transition area of cornea to sclera - limbus: the superficial layers of the sclera are looming on the cornea and the inner layers are slightly behind; cornea becomes like glass, inserted in the rim of watches. Due to metabolic disorders, formed a so-called "arcus senilis", which reduced corneal sensitivity.

The structure of the cornea

Physiology of the cornea

Corneal temperature is about 10 ° C below body temperature, which is caused by direct contact with moist surface of the cornea and external environment, as well as the lack of blood vessels. When the eyelids are closed corneal temperature nearby the limbus is about 35,4 ° C and 35,1 °C in the center (with eyelids open ~ 30 ° C).

Therefore it is possible the growth of mold fungus which caused a specific keratitis.

Cause of absence of lymph and blood vessels, metabolism and nutrition of the cornea occurs by diffusion and osmosis (due lacrimal fluid of the anterior chamber and moisture from pericorneal blood vessels).

Lack of blood vessels in the cornea is compensated by abundant innervation, which is represented by trophic, sensory and autonomic nerve fibers. Metabolic processes in the cornea are regulated by trophic nerves extending from the trigeminal and facial nerves.

High corneal sensitivity provided by the system of long ciliary nerves (from the ophthalmic branch of the trigeminal nerve) forming perilimbal plexus around the cornea. Entering into the cornea, they lose the myelin sheath and become invisible. In cornea formed three tiers of nerve plexus - in the stroma, beneath the Bowman's layer and subepithelial. The closer to the surface of the cornea, nerve endings become thinner and their intertwining becomes denser. Almost each cell of the corneal epithelium provided a separate nerve ending. This explains high tactile sensitivity of the cornea and sharply expressed pain in outcrop sensory endings (epithelial erosion).

The high sensitivity of the cornea underlies its protective function. Even with a light touch to the surface of the cornea occurs unconditional corneal reflex - eyelids close, eyeball rotates upward, removing the cornea from the danger, appears lacrimal fluid washes away the dust particles.

Afferent part of corneal reflex arc carries the trigeminal nerve, the efferent - facial nerve. Loss of corneal reflex occurs in severe brain lesions (shock, coma). Disappearance of corneal reflex is an indicator of depth anesthesia. Reflex disappears in some lesions of the cornea and the upper cervical part of spinal cord.