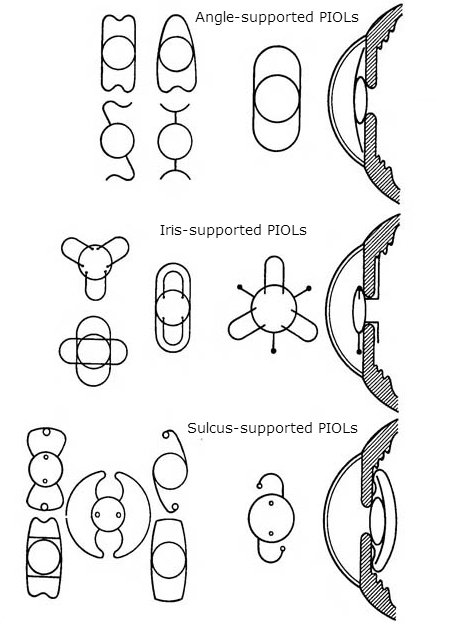 - artificial lens implantation after cataract surgery or a condition in which an aphakic eye has been fitted with an intraocular lens to replace the crystalline lens.

Eye with an intraocular lens is called pseudophakic eye.
An intraocular correction of aphakia has several advantages over the glasses.  It is more physiological, removes the patient's dependency from glasses, does not narrowing the field of vision, peripheral scotoma, distortion of objects. An image on the retina is formed in normal value.

Typically the intraocular lenses are made of a hard (PMMA, leucosapphire etc.) and soft (silicone hydrogel, polymethylmethacrylate, collagen etc.) material.

In one eye can be entered at once two artificial lens. If for any reason optics in pseudophakic eye proved to be incompatible with the optics of the other eye, then its complement by another artificial lens with necessary dioptric power.

Currently, there are a lot of IOL constructions. By the principle of fixing in the eye are three main types of artificial lenses: